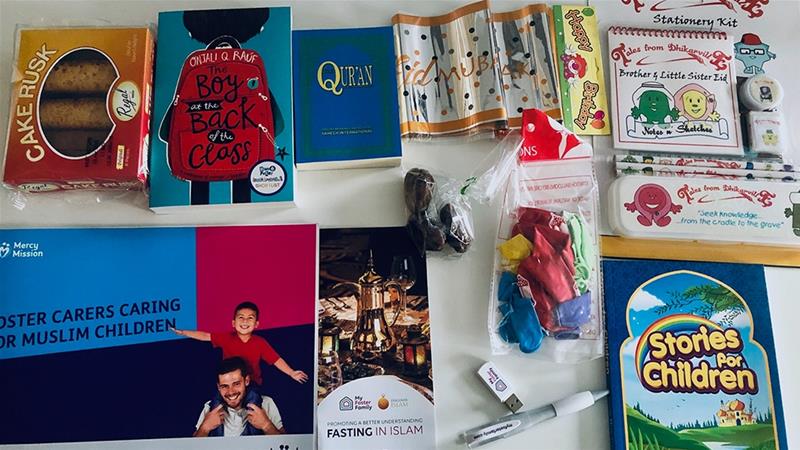 “We wanted the parents who are looking after Muslim children to feel that they are supported and ensure they have a holistic approach in helping them look after the physical, spiritual and mental needs of the children and aid them with giving them support and guidance during the holy month of Ramadan,”

In an effort to preserve children’s identity, young Muslims in foster care being taken care of by non-Muslim guardians have received Ramadan gift packages to celebrate Islam’s holy month.

At least 500 children in Britain have received the gift boxes, which contain children’s books, decorations, a copy of the Quran with English translation, food items for when the daily fast breaks, Ramadan recipe books and sweets.

“The meaning of the Quran book is really useful for me and I’ve been able to share things in the box with my whole family,” a 15-year-old child told Al Jazeera.

A 17-year-old said he was excited to receive the decorations in particular, and enjoyed putting them up with his foster carer.

Foster carer Steve Riley from West Yorkshire said: “We took a photo of my little one with all the contents and with the lanterns lit and we’ve put it in the child’s life story book. It was important that the little one was able to take part and have a record of Ramadan.”

Clare Jones (not her real name), a foster carer from Bradford, said: “It’s such a good idea that helps children understand their heritage. Our child absolutely loved the lanterns. We shared the information in the box with the child’s school and they were really impressed too and used it to help the other children in class understand what being a Muslim means and what Ramadan is about.’

There are more than 3,000 Muslim children in foster care each year out of 64,000, according to a report by the Fostering Network.

Research by charity Penny Appeal and Coventry University estimates, however, suggests that the number of Muslim children in foster care has increased to over 4,500 a year.

“We want to ensure that the efforts of diverse foster carers are recognised and appreciated by giving them the support they need during the special holy month of Ramadan,” said Shadim Hussain, founder of My Foster Family, the organisation leading the gift boxes initiative.

Some Muslim children in need of care have come into the UK as child refugees from war-torn countries such as Syria, or as Unaccompanied Asylum Seeking Children (UASC).

According to a report released by the Bridge Institute, local authorities need more support in teaching cultural and religious sensitivities to foster carers.

She added that the Ramadan gift boxes are “a great way to reach out to children in care, to keep them feeling involved and included in their religious festivals, and to show their foster carers that they have wider support from the community too.”

Finchley Mosque and Islamic Centre was among the participating mosques supporting the initiative and sponsored 100 gift boxes.